what was the divine purpose behind sending the Prophet Mohammed – peace be upon him – to people, was it to send a specific message? Or was it to put legislations and law for humanity? Or was the Messenger task is forcing people into Islam? Or what?

The researcher and Islamic thinker Ali Muhammad Al-Shurafa Al-Hammadi discussed these questions, in his outstanding book «Muslims  … between religious Speech and the divine Speech», issued by «Al-Nokhba House for printing, publishing and distribution» to end what said about the task of the Messenger – peace be upon him – by stating : (( Allah has chosen His Messenger from among His creation, to carry the message of Allah to the people, where he says in his holy book: “Say to them O Muhammad: «I am only a mortal like you, but I am prompted by Allah to impart to you the knowledge inspired to me. It emphasizes that your Allah is One and only, the Creator of the whole and of all in all». «Therefore, he who acknowledges Resurrection and Judgement and hopes to be welcomed in Allah’s heavenly realm and be a recipient of His mercy and blessings will have to imprint his deeds with wisdom and piety and never to incorporate with Him, other deities nor invoke besides Him any».. (AlKahf: 110)

Also, the Almighty said to his messenger: “« Say to them: «Praise be to Allah and extolled are His glorious attributes; am I in any respect but a human Messenger!». (AlIsra: 93)

The Almighty describes the mission of His Noble Messenger by saying: “Allah has been gracious to those whose hearts have been touched with the divine hand. He raised in their midst a Messenger who is related to them by kinship and by spiritual qualities into which they all entered. He is a Messenger who shall recite to them His revelations, impart sanctity to them and teach them the Book -the Quran- and acquaint their hearts with wisdom, notwithstanding that they were once lost in the maze of error and liberally swam in immoral pleasure.. (Al-‘Imran: 164)

Allah sent His Messenger to teach people and explain to them the divine legislation and explains to them the goals of Allah’s orders to his creation, where the Almighty says: You people have always had an exemplar of the Messenger of Allah who displays a good quality as well as a magnificent attribute of a great master whose conduct induces imitation by the one in whose bosom hope springs eternal of Allah’s mercy and of the bliss of the hereafter and applies remembrance to Allah often enough. (Al Ahzab: 21).

Allah sent His Prophet to teach people how to follow His divine legislation and attributes, which Allah has prescribed for them in a way that elevates man with values ​​of faith and lofty ethics.

In order to correct the misconceptions and the distortions transmitted by the writings of jurisprudence and the different interpretations, which relied on tales attributed to some companions of the prophet and were transmitted orally after more than two centuries from the death of the Prophet. These tales were used in the interpretation of the meanings of the verses in the Qur’an and the confusion in the convictions of Muslims. This resulted in the distortion of the image of the Islamic religion to other peoples. This is because each group depended on its own concept. Each sect looked high at their scholars and referred to them as the sole reference in matters of jurisprudence, rituals of worship and transactions. This has led to the creation of independent social entities in the same community. Some of these sects considered the other sects as unbelievers. The reason for this is the human opinions and the interpretations that followed the tales of the misguided varied sources. These sources have differed goals, but they agreed to disperse Muslims and take away from the curriculum of the holy Qur’an.

Running away from "Islam"

Did the Prophet deliver the task?

Restoring the greatness of Islam 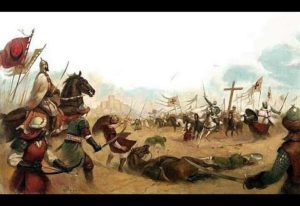 Why did the nation collapse after the death of the Prophet? (2-2)