The UAE thinker Ali Mohammed al-Shurafa al-Hamadi criticized the people and movements that always cast doubt on the decisions of the Egyptian state. The thinker considered them as “pretenders and hypocrites”. The author assured that the history will record the achievements of Abdel Fattah al-Sisi with bright letters.

Al-Shurafa said; “In every society, you find people with great deal of science and culture that has led them to self-enlargement. The “ego” has deepened itself inside them. This ego has led them to seek a prestigious position in their society to satisfy their ego through wealth and status. They aim to gain a political leadership in their homeland, where people will race to win their appreciation and get closer to them to feel proud and satisfied to enjoy what they got of position and status”.

The Emirati thinker explained that if they fail, their souls turn into a state of reprisal against the society and to the destruction of all the achievements of the state and disregard for all the great works that the leadership has done for the benefit of the Egyptian people. They spread rumors to frustrate citizens to instill despair in the hearts of people in order to stop the movement of development. The people of Egypt began to harvest the fruits and reap some of their produces such as security, work and giant projects. Every day, a new project emerges, as well as oil and gas discoveries, as if Allah Almighty is saying to people, “Indeed what awaits you in the Hereafter far excels all that you will experience here with all the gratification and happiness to be occasioned by future victory and satisfaction. And Allah, your Creator, shall bestow on you gratuitously what will meet with your expectation of blessing and benefaction”. The author adds that those hypocrites are mentioned in the holy verse: “Unless the hypocrites and those whose hearts reflect the morbidity inherent in their inmost being as well as those who incite to rebellion against the Muslims in the city and molest the women cease from such actions, We will instigate you to war upon them and give you mastery over them and they shall then find it difficult to neighbour with you therein but for a short while.“

Al-Shurafa addressed a message to the movements that doubt the achievements of the Egyptian administration. The writer said: “I tell them that the June 30th revolution was the cry of an entire people that shook the entire world, enough backwardness, enough suffering and enough frustration. The nation has made their decision and trust Allah Almighty with unswerving resolve. The nation will not stop the march towards achievements”. The writer continued, “The foxes and the thieves will not delay the progress of the nation towards the hoped goals in security, freedom and decent living. The nation will crush the enemies in the great march towards progress and prosperity. The nation will not allow to return again to the cruel suffering that has beset the people for more than sixty years”.

The Emirati thinker added “The Egyptian people have embarked on a bright future led by men who are honest and strict in achieving their promises in front of Allah. They will not hesitate to achieve the goals of the homeland in security, stability and progress towards a free and dignified life. “The history will be record in bright letters the historic role of President Abdel Fattah al-Sisi when he led his nation with courage and faith to achieve victory or to die for Allah Almighty to save Egypt from a frightening fate. The President led his nation in the path of progress and prosperity and he is absolutely confident that Allah will grant him victory in achieving the hopes of the Egyptian people. We pray to Allah Almighty to support the Egyptian people and the Egyptian leader after the people has become sure that their leader is loyal and honest. The Egyptians have tested the loyalty and devotion of the president for the benefit of the Egyptian people. Long live Egypt.”

Purification of religion from impurities.. One of the purposes of the thinker Hammadi

Mystery of the catastrophe that Muslims have been witnessing for 1,400 years

ISIS…. the production of religious speech

The mystery of diversity and difference in human customs and cultures 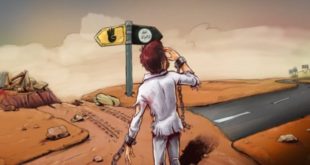 Muslims in front of two tracks, no other choices!